About the Broward County Florida Area

With our office conveniently located in Davie, Florida (central Broward County), MREII realtors are your local experts for South Florida Real Estate. With expertise in residential, commercial and rental properties, in the surrounding communities of  NW Broward county including Coconut Creek, Coral Springs, and Parkland, as well as Boca Raton, Delray, Weston and Davie, MREII Realtors want to assist you today and in the future. 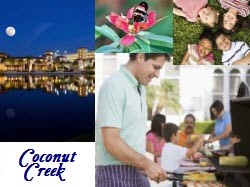 Coconut Creek, Florida, in Broward county, is 1 miles E of Margate, Florida (center to center) and 33 miles N of Miami, Florida. The picturesque well-planned city features a vast number of trees, beautiful parks, waterways and landscaped communities. The environment includes wooded areas and wetlands. It's known as the "Butterfly Capital of the World" and features one of the largest butterfly aviaries on the globe. Coconut Creek is recognized as an environmentally friendly community. The city was incorporated in 1967.

Coconut Creek Attractions
Butterfly World is a prominent Florida tourist attraction and features a butterfly aviary which is regarded as one of the largest in the world. It's home to approximately 5000 live butterflies. It also includes a bug zoo and the Jewels of the Sky Aviary which features hummingbirds and other bird species. Visitors enjoy the venue's waterfalls and attractive gardens. There are other noteworthy attractions in the city including:
Seminole Casino Coconut Creek
Butterfly Parade
Sabal Pines Park
Tradeswinds Park
Butterfly Festival 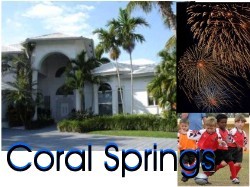 MREII.net Realtors are your local experts on Northwest Broward County.

Popular locations include the western suburbs of Tamarac, located about 13 miles northwest of Fort Lauderdale and 40 miles north of Miami. The city is bordered by Coral Springs to the north and Sunrise to the south. It is easily accessible from the Sawgrass Expressway and the Florida Turnpike and is also close to Interstate I-95.

Arts and Recreation in Tamarac
Tamarac boasts a number of parks which provide a variety of amenities and recreational opportunities for residents and visitors alike. Veteran’s Park has a veteran’s memorial. Sunset Point Park features a walking trail, playground, and a small amphitheater. Caporella Park offers picnic tables, grills, playground, and a lake with a fishing pier. The Tamarac Sports Complex includes a hockey rink, tennis and basketball courts, fields for baseball, softball, football, and soccer, as well as a gazebo, covered playground, and picnic tables.
The Tamarac Theatre of Performing Arts is one of South Florida's finest venues for live stage entertainment. In existence for over 25 years, the theater features a regular schedule of stage plays and musicals, as well as a Children's Theater program that teaches all the performing arts, covering dancing, singing, acting, and stagecraft. Tamarac's central location provides easy access to numerous attractions in nearby cities and towns. To name just a few, these include the Fort Lauderdale Historical Museum, the Anne Kolb Nature Center in Hollywood, the Fort Lauderdale Museum of Art, the Graves Museum of Archaeology & Natural History in Dania Beach, the African American Research Library and Cultural Center in Fort Lauderdale, and the City of Plantation Historical Museum.

Chartered in 1963, Coral Springs is only thirty minutes from the Fort Lauderdale-Hollywood International Airport and thirty-five minutes from Port Everglades, the second busiest cruise port in the world. Major highways in and around Coral Springs include: the Florida Turnpike and the Sawgrass Expressway.
Many of Coral Springs schools have received the "Five Star School Award" from the Florida Department of Education as schools that have shown evidence of exemplary community involvement.

Attractions of note in and around Northwest Broward include:

Area sports can be found at a number of nearby places. The International Swimming Hall of Fame is one of the principal attractions in nearby Fort Lauderdale Beach. The BB&T Center in nearby Sunrise is the home arena of the NHL's Florida Panthers hockey team. The city of Miami, about an hour's drive from Coral Springs, with world renowned shopping and famous South Beach. 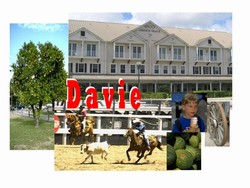 Davie, Florida is located in Broward County, Florida, only 9 miles southwest of Fort Lauderdale and about 25 miles north of Miami. It is bordered by the Florida Everglades to the west, and is centrally located among major thoroughfares such as Interstates I-595, I-75, and I-95.  Davis is a short 15 minutes away from the Ft. Lauderdale/Hollywood International Airport.

Davie is home to the campuses of a large number of educational institutions, including the Central Campus of Broward Community College and the Davie Campus of the University of Florida. Davie is also home to Nova Southeastern University. The classic movie, "Caddyshack" was filmed in Davie.

Davie is home to Flamingo Gardens, a 60-acre site showcasing rare, exotic and native plants. The town is also home to the Young At Art Children's Museum, a hands-on cultural and educational arts venue where kids can express their creativity in a fun and exciting environment. Also in town is the Bergeron Rodeo Grounds. Located in the historical western-themed district of downtown Davie, this attraction has long served as Davie’s main tourist draw. The indoor/outdoor facility was originally established as a rodeo arena, but later expanded to meet the demand for more diverse events such as top name concert entertainers, circuses, monster trucks, horse shows, dog shows, car shows, air boat shows, and industrial shows.

Davie is also the host site of several annual events: 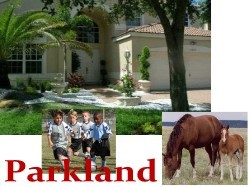 Parkland, Florida is just north of Coral Springs, Florida.  Established in 1963, the population was less than 4,000 in the 1990s yet rose to about 14,000 within a decade or so. The zoning laws of Parkland were framed in such a way that they would protect the “park-like” spirit of the area. The city did not even have any traffic lights or stores in the beginning. However, they have been introduced in the recent years.
Parkland is situated in an ideal location where one can live a very peaceful life, while having all the amenities of a city. The city has several social organizations and groups that arrange a wide range of cultural and recreational activities. The beaches of South Florida are a short drive away. The city is surrounded by several miles of equestrian trails, which provide great opportunities for horse riding. The city also has many golf courses.
Courtesy of citytowninfo.com 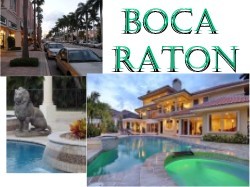 The coastal city of Boca Raton, Florida is located about 20 miles north of Ft. Lauderdale, Florida.
Local Attractions include:
Annual events in Boca Raton include: 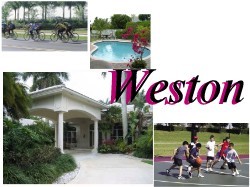 Seated in western Broward county, Weston, Florida, is located 8 miles W of Sunrise, Florida and 27 miles NW of Miami, Florida.
In 1984, Weston, a planned community, had its first home construction and residents. Weston features wide streets, has a manicured appearance and is regarded as an upper middle class, affluent community. The city includes a sizeable Hispanic population and numerous bilingual stores.
Residents enjoy the activities at the boardwalk and beach at nearby Hollywood. Weston has many municipal parks offering outdoor activities, including fishing and features a large number of golf courses.